After watching Blade Runner 2049, I've been a bit bothered about Joi. You see a picture like this: 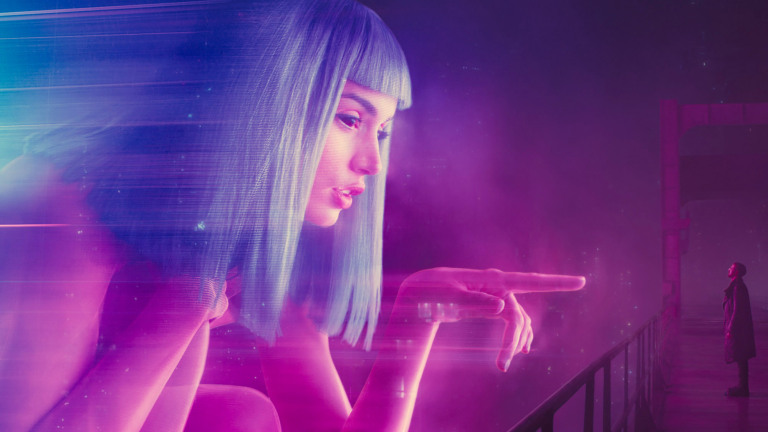 and I kind of wonder - was she just a toy? Something to distract K from the loneliness of his life, to give him at least some sense of purpose? Everything you want to hear, to see - is she just some device that we can use to gain a glimpse of K's soul? (Yes, he does have a soul, as both Blade Runner films will tell) In that form, she's just a mirror image of K, or a manifestation of his unconscious, whatever way you look at it.

However, that doesn't really thematically fit Blade Runner - Joi must be more than that. The films showed us replicants are human (or close enough) - why not holograms? One thing is for certain though - if we've learned anything from the franchise, it's that the eyes are immensely important, and therefore the Joi we see in the above photo is dead, lifeless - soulless. Her eyes are just empty brown slits. In the words of Mariette: "There's nothing inside."

Is that the end of all hope, then? I think one big clue lies in another Joi advertisement, shown during the K-Joi-Mariette love scene:

We see a very similar advertisement, but in this case, the "Joi" is altogether very alive, her eyes deep and fully fleshed out. I think these two advertisements hint that Joi did, in fact, have a soul, and then lost it, presumably when Luv crushed her transmitter (is that what you call it?) (Luv crushing Joi - a fun play on words). The leftover "Joi" we see in the final advertisement is her soulless body.

Throughout the film, we also constantly see Joi trying to transcend her immaterial form. Remember the ad: "Everything you want to hear, to see". What about feel or touch? Yet, Joi constantly attempts to touch K and ultimately become real in the world - see the rain scene, or the love scene. I believe this is a clear example of free will - she's breaking from her programming in order to become a better companion to K. Joi even expresses jealousy over Mariette - something you probably wouldn't program your holographic companion to have. Thus, if anything, Joi is human - and therefore she has a soul.